Everything that Christians believe and do is shaped by a collection of documents written up to 3000 years ago. The Bible tells the story of the life of Jesus and his first followers. It tells the history of the Jewish people in the centuries that came before Jesus, and has writings about what it means in practice to be faithful to God.

The Bible is a book of 66 documents in two sections. 27 of the documents were written during the decades after Jesus. They contain his biography, and also describe what his first followers did in response to his extraordinary life.

39 of the documents were written before the time of Jesus and describe the history of the Jewish people. Jesus, who was a Jew, knew these writings well and quoted them where they referred to him. The New Testament is the shorter of two sections. In today’s published editions, it is the final third of the Bible. The documents in it (usually known as ‘books’) were written in Greek between 20 and 60 years after Jesus’ resurrection. None of the original manuscripts have survived, but they were copied and copied with painstaking accuracy. The earliest handwritten fragments of the Bible date back to about 90 years after Jesus.

During the second century the books of the New Testament circulated among Christians. Alongside them were other books whose value was questioned. Over the course of time it became increasingly clear that the 27 published in Bibles today were authentic and had authority. At an international conference of Christian leaders held in North Africa at the end of the fourth century it was decided that these could be trusted as being inspired by God. They are:

These are four biographies of Jesus. They are named after Matthew, Mark, Luke and John, although it is not straightforward to work out who wrote them. Gospel means ‘good news’.

The Acts of the Apostles

Known as ‘Acts’ for short, this was written by the writer of Luke’s gospel as a sequel. It describes how the followers of Jesus came together as a church, and then became a movement that expanded rapidly through the known world.

These are sometimes called ‘epistles’. Thirteen of them are attributed to a Christian leader named Paul, who energetically spread the news of Jesus. They were written to churches he founded on the north coast of the Mediterranean Sea, or to their leaders. Another eight were written by other significant leaders.

The final book of the Bible is the Revelation to John - a collection of letters, visions and dramatic symbolism.

The Old Testament (otherwise known as the Hebrew Scriptures) occupies the first two-thirds of the Bible. Jews and Christians regard it as sacred. The books in it were written in Hebrew 200 to 500 years before the birth of Jesus. Parts of it existed many years before that, but were brought together by editors during those centuries.

The books of the Old Testament include histories, songs (or ‘psalms’), prophecies, ancient laws (such as those known as ‘the ten commandments’), poetry, wise sayings and timeless stories.

Everything that Christians believe is shaped by the Bible. 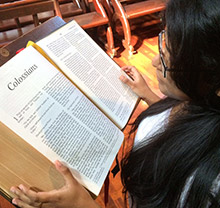