Jesus was born as a Jew over two thousand years ago, in the country now known as Israel. Jesus called God ‘Father’, but that was not unusual in itself. All Jews rejoiced to see themselves as God’s children. But Jesus talked about a unique relationship with God. On one occasion in Jerusalem he declared, “I and the Father are one.” People were very angered by this, as they believed it was a serious insult to God.

Jesus did not announce to people, “I am God.” Instead he said and did things that made people wonder if he might be divine. It was not possible for many Jews to even consider that possibility. So when Jesus’ followers came to believe that Jesus was God, they were thinking the unthinkable. But the evidence so overwhelmed them that they had no choice. Worshipping the risen Jesus was the only way they could make sense of what they had witnessed.

One of the accounts of Jesus’ life tells the story of a paralysed man being lowered through a ceiling to come to rest at his feet. The house was so packed with people who wanted to hear Jesus speak that it was the only way to attract his attention. The expectation was that Jesus would heal the man. Instead Jesus said to him, “Your sins are forgiven.”

The Jews were shocked because their belief was that only God could forgive sins. Jesus pointed out that to say those words was easy. It was working a miracle that was difficult. He was suggesting that if he was able to heal the man in front of their eyes, they should have no difficulty believing that he was able to forgive him. At Jesus’ command, the man stood up and walked. Without saying as much, Jesus had challenged those who saw the event to believe that he was God, the only forgiver of sins.

Jesus never avoided challenging statements. He called for absolute loyalty to him – the kind of loyalty that God demanded. “I am the way, the truth and the life,” he declared. “No one comes to the Father except through me.” But his call was not burdensome. He invited people to come to him for rest, and to go through their lives with him as a companion – not only in life, but throughout eternity.

The claims of Jesus repeatedly pushed people to a point of decision. The Jewish leaders responded by trying to stamp out his ideas. The followers of Jesus responded by rethinking everything they knew about the Jewish religion. When his resurrection put their beliefs beyond doubt, they became the first leaders of Christianity.

Jesus said, "I am the way, the truth and the life." 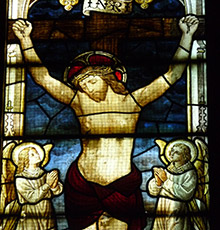