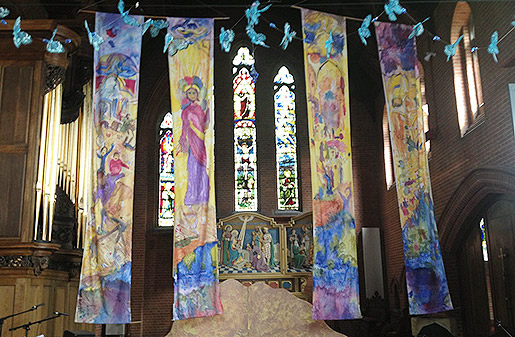 Jesus was popular with ordinary people, but he had enemies too. Jesus often spoke about the hypocrisy of those in power, especially the religious authorities, and they saw him as a threat. They paid one of his disciples, Judas, to lead them to Jesus at night so that they could arrest him quietly. Jesus was taken to the chief priests and questioned. To them, it was blasphemous that Jesus claimed to be the Son of God and, under Jewish law, they wanted him executed. But the country was under the control of the Romans, and their permission was needed. So the priests took Jesus to the Roman governor, Pontius Pilate. Pilate also questioned Jesus, but could find no reason to put him to death. But the priests and the crowd insisted, and Pilate gave in to their demands.

Jesus was beaten by the soldiers and taken to the place of execution. He was nailed by his hands and his feet to a wooden cross. People taunted him, saying that if he was the Son of God he would free himself from the cross. After hours of agonising pain, Jesus died.

Some of his followers took Jesus’ body from the cross and laid it in a tomb. Some of the women wanted to anoint his body, but they had to wait until after the Sabbath, a holy day when no work was permitted. The next morning, the women went to the tomb and discovered that the stone over the entrance had been rolled away and the tomb was empty!

Over the next few days and weeks, Jesus met his disciples and proved that he was alive. He still had the scars of the crucifixion, but he had miraculously come back to life.

You can read these Bible verses about the death and resurrection of Jesus.

Almost all Christians mark Easter, but the ways they celebrate it vary. The week leading up to Easter Sunday is often called Holy Week and Christians focus more deeply than usual on their faith.

It begins with Palm Sunday. Services on this day, seven days before Easter, recall Jesus entering Jerusalem triumphantly, cheered by crowds as he rode a donkey. Palm leaves were waved on that occasion, and are still significant in church worship, often twisted into the shape of a cross.

Four days later is Maundy Thursday, when Jesus’ followers remember that on the night before he died he asked them to remember him by eating bread and drinking wine. Maundy comes from the Latin word for commandment, recalling Jesus’ command that day that Christians should love each other in the same way that he loves them.

The next day is Good Friday (called Holy Friday in some countries). This is the most solemn day of the Christian year because it is used to recall the appalling death of Jesus. Many churches hold processions or open air services in public places to draw attention to its significance. Inside churches there are meditative services in a bare setting. It may be that the day was originally known as God Friday, and the name changed as language developed.

Easter Sunday recalls the day when Jesus’ followers discovered that his tomb was empty. It is the most important and joyful day of the Christian year. Jubilant music is performed, and flowers and banners fill the churches with colour. The centuries-old cry, "Alleluia! Christ is risen!" is met with the response, "He is risen indeed. Alleluia!"

Christians have always believed that because Jesus lived, died and rose from the dead, the relationship between God and humans has changed for all time. God and human beings can be friends.

To try to explain this, Christians have developed metaphors – ways of describing what is ultimately indescribable. None of them has been adopted as the sole view of the church. It is something too complex and mysterious to understand, but they all give glimpses of what Jesus has done for humans.

When Jesus died on the cross, evil (personified as the devil) made its strongest bid to defeat God. But when Jesus rose from the dead, God showed himself victorious over evil. Nothing can now keep humans from his love.

Because God has justice at the heart of his nature, all wrongdoing must be punished. This alienates humans from God. When he died on the cross, Jesus willingly received our punishment instead of us. God’s need to see justice has been satisfied, and now nothing can separate humans from him.

God identifies with humans in their greatest need

Out of his great love, God does what seemed to be impossible. The death of Jesus shows God suffering in the most wretched way imaginable. God and humans are now totally united. They were united in the worst humans can suffer, so they will also be united in the best heaven can offer.

Jesus was a ransom

Jesus was the price paid to the devil in order to liberate human beings from the slavery they were under – slavery to sin.

Jesus was our supreme example

The love of Jesus, freely giving himself on behalf of this needy world, overcame everything negative. It inspires men and women to the kind of transformation that would be impossible without him. Each attempt to understand how the life of Jesus has changed the relationship between God and humans leads back to a historical fact – a man being put to death in a hideous fashion. This is why the cross has become the central symbol of Christianity.

At Easter, we remember the death of Jesus and celebrate his resurrection.