Mary, Jesus’ mother, was engaged to Joseph when she was visited by an angel, Gabriel. Gabriel told Mary that she would give birth to a special baby, who would be called the Son of God. Although still a virgin, Mary became pregnant. Joseph didn’t know what to do but God told him in a dream not to reject Mary. Around the time that the baby was due, everyone had to return to their home towns in order to be counted in a census. Joseph and Mary travelled to Bethlehem, but they couldn’t find anywhere to stay. When Jesus was born, Mary wrapped him in cloths and used a food trough for animals as a cradle. At the time of his birth, angels appeared to shepherds on the hills nearby, telling them that their saviour had been born. The shepherds rushed to Bethlehem and found Mary and Joseph with Jesus, as the angels had said.

You can read these Bible verses about the birth of Jesus.

For Christians the significance of Christmas is that God is not remote, but has come very close to humans. God’s love for us is so great that he has identified with human beings completely. He has inhabited a human body. Jesus did not come to show God in all his might, conquering men and women. Instead God was born as a baby, making himself helpless and completely dependent on humans for his survival. By making himself one with humans at their weakest, God has created the circumstances in which they can be at one with him. This is why the stories of Jesus’ birth are so important to Christians. Christmas Day is celebrated as the anniversary of Jesus’ birth, although the actual birth date is not known. Most Christians celebrate it on 25 December. However, the Orthodox Church (the ancient group of Christian churches found especially in Eastern Europe and parts of Asia) follows a different calendar and celebrates on 7 January.

In the early Middle Ages, Christians celebrated a series of midwinter holy days. Epiphany (which recalls the visit to the infant Jesus of the wise men bearing gifts) was the climax of twelve days of Christmas, beginning on 25 December. Cooking a boar was a common feature of medieval Christmas feasts, and singing carols accompanied it. The day was a public holiday, and traditions of bringing evergreen foliage into the house and the exchange of gifts date from this time. Today we still exchange gifts as a symbol of God’s ultimate gift to us through the birth of Jesus - God coming to earth to be with us.

By the 1820s, there was a sense that the significance of Christmas was declining. Charles Dickens was one of several writers who sought to restore it. His novel A Christmas Carol was significant in reviving merriment during the festival. He emphasised charity and family reunions, alongside religious observance. Christmas trees, paper chains, cards and many well-known carols date from this time. In Europe, Santa Claus is the imaginary figure associated with the bringing of gifts. Santa Claus is a shortening of the name of Saint Nicholas, who was a Christian bishop in the fourth century in present-day Turkey. He was particularly noted for his care for children and for his generosity to the poor.

Father Christmas dates from 17th century England, where he was a non-religious figure of good cheer. The transformation of Santa Claus into today’s Father Christmas started in New York in the 1880s, where his red robes and white beard became potent advertising symbols. In some countries, people combine the traditions by imagining that Santa Claus makes children’s presents and then gives them to the baby Jesus to distribute.

At St George’s we have three major events to celebrate Christmas together. A children’s play, called the Nativity, where the children act out the story of Christmas, and we sing songs (called carols) about this story. A service in the middle of the night, called Midnight Communion at 11pm on Christmas Eve, which has a special atmosphere, helping us to celebrate the birth of Jesus with wonder. Then, on Christmas Day, we have a service for everyone, a bit like a birthday party. All are welcome!

At Christmas, we celebrate the birth of Jesus Christ. 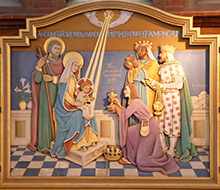 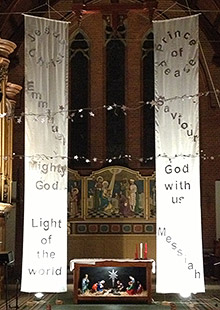